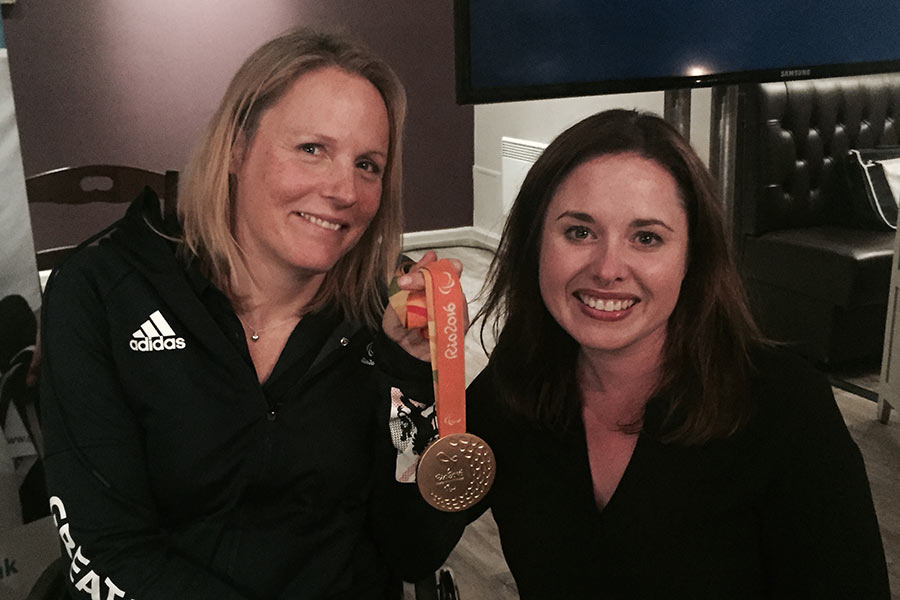 Though-provoking words from Paralympic gold medalist Karen Darke. As Patron of Cornerstone, a charity that works hard to make the lives of those living with a disability better, Karen’s experience reflects the challenges that each of us face regardless of circumstance.

Thorntons Investment Management is a proud patron of Cornerstone, and on Thursday 10th November marketing and communications manager Karen Slupinski attended its annual Patron’s Dinner in Aberdeen. The evening was an opportunity to find out more about the charity’s work, and a chance to hear from Karen Darke whose disability has certainly not held her back.

Karen was paralysed from the chest down after a climbing accident on the Aberdeen coast. She candidly shared stories of her recovery in the early days, and the unfathomable reality of completing the Great North Run on her hand-bike just one year after her accident. Since went on to complete the London Marathon a few months later and has not stopped for breath since. She won gold at the ITU Paratriathlon World Championships in 2012 and secured a silver and bronze at the 2014 UCI Para-Cycling Road World Championships. She won silver as a Paralympic handcyclist in London 2012, just before being hit off her bike by a car that resulted in emergency surgery and the loss of sensation in her right arm for a year.

In her spare time Karen has crossed Greenland’s ice cap whilst sitting on skis using her arms and poles to cover the 372-mile crossing. She has climbed Mont Blanc, Matterhorn and El Capitan and has hand-cycled, skied and swam the length of Japan.

She shares stores of just months before Rio 2016 working with volunteer engineers at Williams Formula1 to design and build a “Bat Bike” that was lighter and more aerodynamic, leaving for Rio without her coach (who had his own cycling accident) and her frustration on the track when her chain fell off her bike and she had to stop to put it back on!

Karen’s achievements are clear – literally hanging around her neck on a gold medal, but she is humble of her triumphs. She identifies herself as the tip of the arrow. The distance the arrow travels and its accuracy in hitting its target is only partly due to its tip, as it is the pressure and force of the projectile that ensures its success. From the medical specialists at the time of her accident and the twenty years since, to her dedicated coaches that support her training and F1 engineers that designed the Bat Bike, her success is a result of a team effort. This embodies what Cornerstone is about. Its staff, team of volunteers and corporate sponsors do their bit to make the lives of those living with disabilities better.

So what’s next? Cornerstone has a number of Christmas events before its annual benefit gala dinner in April and Thorntons Investments starting making good progress with organising its annual Sports Dinner in May, proceeds of which will support Cornerstone.  And Karen? As part of her “Rio recuperation” she leaves on Saturday to cycle around Patagonia. I think that says it all!